Connect and share knowledge within a single location that is structured and easy to search.

I've had a suspicion for a while that there are simply not enough active users (or users with enough rep) on Fitness.SE to pass a community close vote.

Obviously we can't compare Fitness.SE to Stack Overflow but the percentage is quite different:

Personally, I have voted to close questions before. Questions that were so blatantly off-topic that I didn't have to think twice. They've hung up around 3 or 4 close votes before a mod either gives the 5th vote or closes it at 4.

Would it be worthwhile to reduce the required number of close votes on Fitness?

This is now live!

Thanks so much for your patience here while we got things worked out on our end. I've reviewed your history with closure on two points and find that it does look like this would be a good change to make here.

The first thing I look at is the percentage of questions that get a first close flag or vote that get handled. Here, that's not bad - 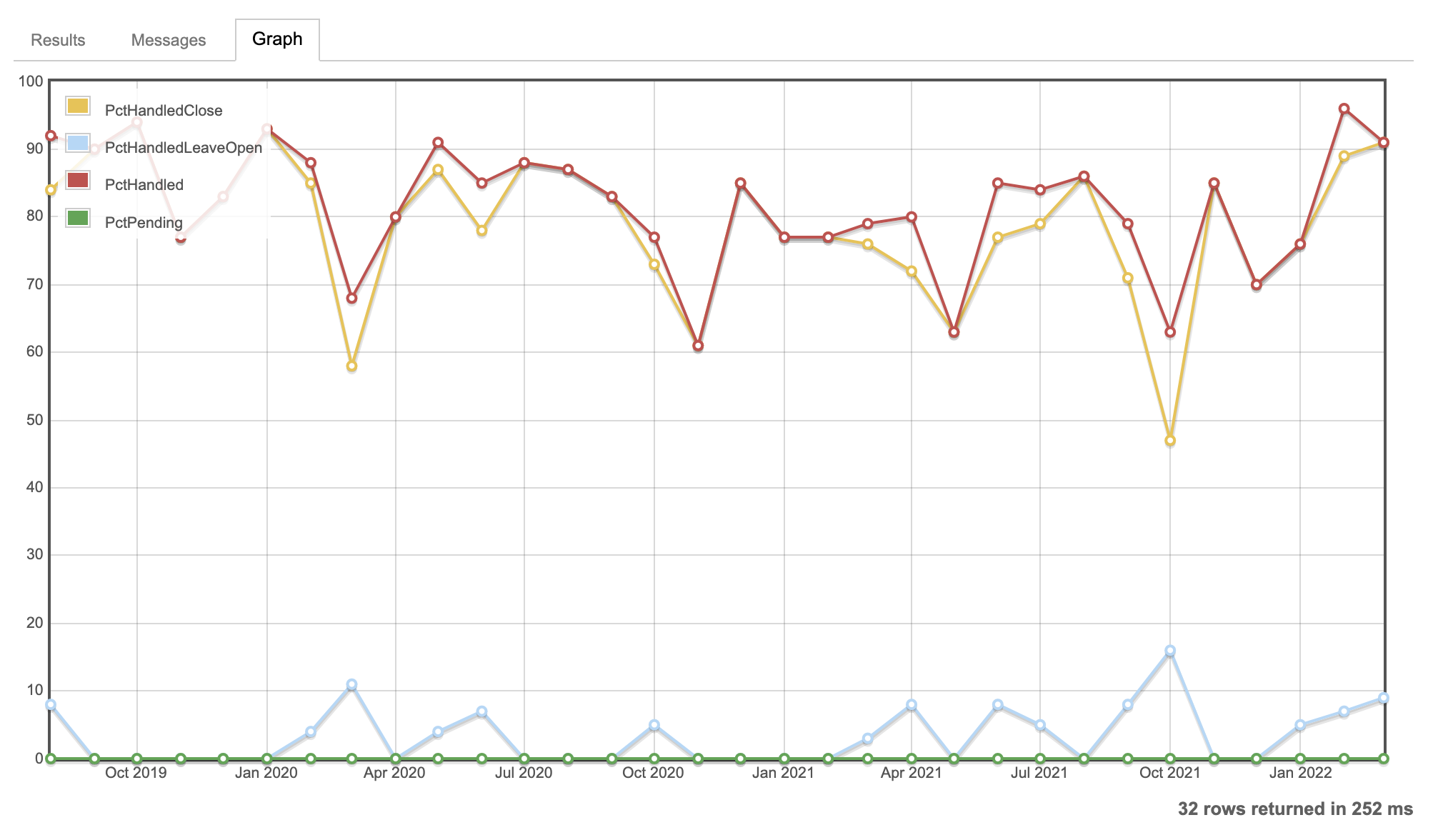 So, this looks generally good. While there's definitely some months where things are a bit more rough, in general, we're looking at decent percentages - not perfect, of course, but not bad... so now we turn to the second graph - how many questions per month were handled by moderators versus community members, both closes and reopens. 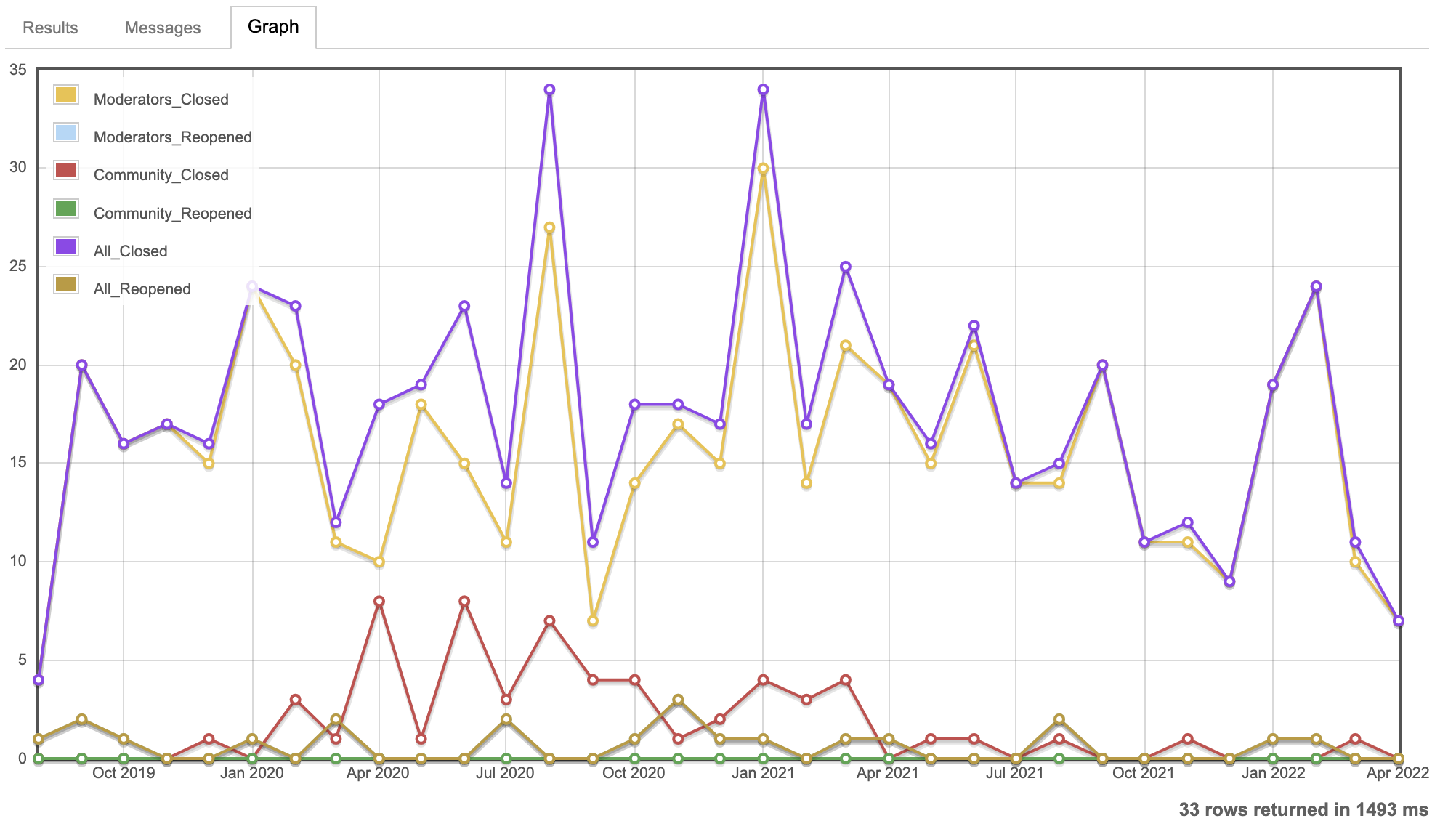 When I see this, the high percentage kinda makes sense - if you're not clear on what this shows, it's indicating that the mods are doing the bulk of the closures here. The purple line is the questions closed per month and the yellow line just below it (and sometimes obscured by it) is the ones that the moderators did the closure for, in the end. It doesn't mean community members weren't participating at all, just that a mod had to cast a vote to close.

While we definitely don't want mods doing all the work as it creates a potentially asymmetric close/reopen process where it's much easier to close than reopen - unless mods are also watching reopens - we also understand that, on smaller sites, this may not be particularly taxing. While the mods are doing a lot of the lifting, the questions closed per month is generally less than one per day, meaning that it's not onerous.

That being said, the community should still be able to handle this without moderator involvement. One of my hopes when I make these changes is that community members will feel more empowered to participate. When five votes were needed, it can feel impossible that you'll ever get enough votes without a mod stepping in. When only three or needed, hopefully that's less of a concern.

Because we ran the big test on many sites that JNat linked to in the comments, we feel pretty secure that this is a safe change to make, so I won't be monitoring it closely. If you have any concerns down the line, please let me know but, for the most part, y'all can consider this change permanent. I'll likely check the numbers in a few months to ensure nothing looks problematic but I won't post an update unless there's something particularly worth mentioning.

If you have any questions, please let me know!

Yes, I think the threshold should be lowered to 3 votes to close.

Keep the close threshold at 5 votes.

Not the answer you're looking for? Browse other questions tagged discussion status-completed closing-questions .

Welcome!
This site is for discussion about Physical Fitness Stack Exchange. You must have an account there to participate.
Help
Visit chat